OK, this seems like an obvious one and pretty easy to fix.  'Been driving me mad for years.  Here's the situation:
On many popular domains or domains that I control, I might have 5-10 different logins accessing services on the same domain. So, think several Google.com logins or, a better example, several logins to different wpengine.com subdomains (see screenshots).  For most but not all Google.com logins, I can distinguish by username or email address.  In situations like wpengine.com where there are many subdomains, it's almost impossible to add or update logins.  I like to use suffixes on records to help me recognize specific logins.  So, eg, subdomain.wpengine.com (suffix_personal) and subdomain2.wpengine.com (suffix_work).

*There are 3 really basic problems with this*
1) during site add, there is no easy way to edit or even see the name field.  So, annoyingly, you have to add the record, then go into lastpass again, try to find the new record, and then edit the Name: field so you can find it next time you need it.  Grr.

2) then, if you ever need to update one of your logins, lastpass first jumps in to suggest that you update one of many impossible-to-view records in a list.  *This one is definitely a bug not a feature!* (see screenshot).

3) I just skip that impossible step and go ahead and log in because LP gives me another more easily visible list of records to choose from post-login.  The only issue here is that the display box is not nearly wide enough to show reasonably sized record names (eg "my.wpengine.com (personal)" or "my.wpengine.com (work)").  So, I can't guess which record to update.  This means, of course, that I need to copy & paste my new pw into **something less secure** like a local notepad client if I want to not get stuck in an endless cycle of pw resets.

What is the recommended workflow for managing multiple logins to singular domains?  Please make it easier to a) customize the Name field of a new record *during first login* and b) actually see the full Name:  field of sites during pw updates.  And, also, please fix the UI bug which obscures records during pw reset.

Screenshot: No way to customize or even view the Name: field during pw add. 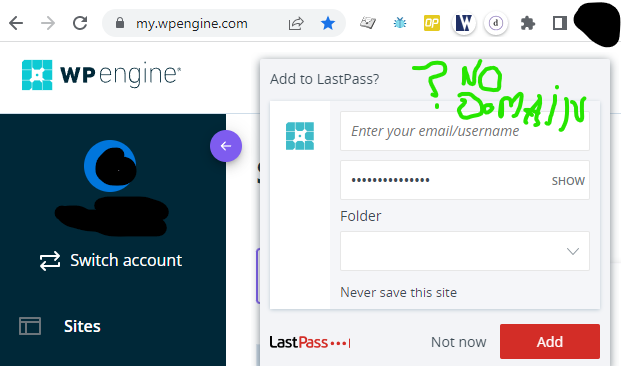 Screenshot:  it's not uncommon for domains to necessitate lists of nearly identical logins.  So, suffixing the Name: field is a good way to distinguish logins. 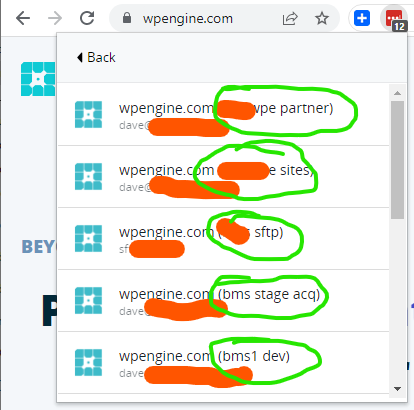 **PROBLEM IS..." during pw reset, the full name: field of sites isn't visible, so you have to guess or paste your PW into insecure notepad or something and then go back and manually update lastpass** 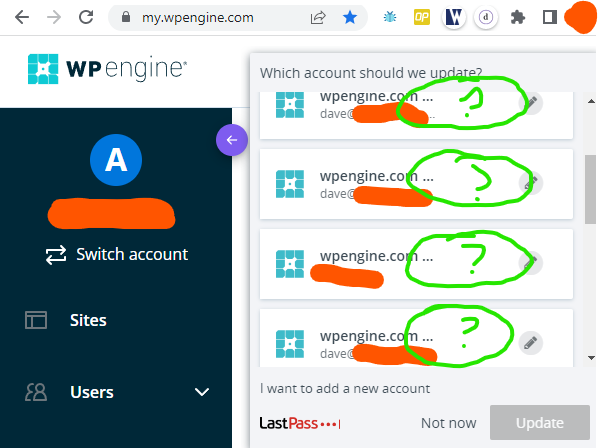 Can I get an amen?  Thanks for considering it.

BTW, here's the bug.  Everything else above is a feature request, I guess, but this one is obviously needs attention.
Why is the window so small?  I have like 12 logins for this site, and I can barely read any of them following pw reset!

Completely agreed, especially about the small amount of screen space...

I'm possibly talking about something different, but to avoid the truncation issue I put the 'suffix' at the start of the name: (bms dev) wpengine.com

But either way it's a bit of a sad workaround!