Personally I use Chrome extension and android app of lastpass and prefer dark mode whenever possible.

+1 for dark mode in the chrome extension.

nighteye.app can't access lastpass for security reasons(a good thing), so please Lastpass it is up to you to fix this. Please get rid of the searing white background in the password list. 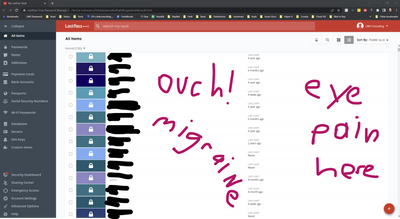 Please add darkmode to the chrome extension - it is a simple reskin that doesn't take much effort for developers.

For every user requesting it here there are thousands of others wanting it.

pretty please! even zoom finally added a dark mode for their windows app.  if its really that hard to re-skin your ui, I'm super concerned about how protected my passwords really are.

Well we are now 3 months away from the 3 year anniversary of when @ingmarins originally posted this "request" which has been voted on by multiple different people, and was even commented on by @RachelO  stating "the developers plan to release a dark mode for Android", and there still ISN'T A DARK MODE FOR THIS FRIGGEN APP ON ANDROID! Meanwhile EVERY OTHER APP I HAVE IN MY PHONE HAS A DARK MODE OPTION! Even some obscure ones that aren't major apps that millions of people use have a dark mode.

COME ON LogMeIn & Last Pass! Get your lazy @$$'$ in gear and get this done ASAP!

Three years is MORE than long enough for you to have implemented this, especially considering EVERYONE ELSE DID IT YEARS AGO!

@LostStonerBoy hopefully it comes soon, the authenticator app already has it