The aforementioned workaround does work for me.  Just to be clear, you've gotta click the second "LastPass" (it just says "LastPass"). 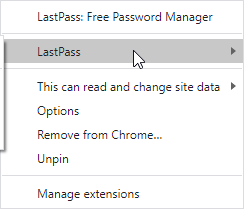 Firefox works as it should.  Just Chrome having the issue, and it is on all the PCs I use (different FPRs including USB ones like digitalpersona U.are.U 4500 and Kensington VeriMark USB, as well as built-in ones such as the ones on the ThinkPad x390 and T480s).

Re: Fingerprint issue - workable solution until this gets fixed.

I have had this issue too, for about two months

As this seems to be an issue that the Devs are working on, I have found a work-around and posted it

on another thread, here

With this work-around, I can get the LastPass Chrome extension to ask for the fingerprint again

Now when Chrome is closed it should close completely, and when it opens again is asks for the fingerprint.

This is not very satisfactory, but at least it seems to work

It's also an issue with Firefox, but the workaround for Chrome works for Firefox as well. It's not "Solved!" It's a workaround. They need to fix this.
1 Kudo
Reply

I agree with @buzzword and @centicon. I'm not sure whether it was OP or the LogMeIn folks who marked this as resolved, but it is absolutely not—the issue needs to be fixed properly.

Our development team is aware of this issue and working on a resolution, although we do not have a date for an ETA to share currently. The workaround has been marked as a solution in the meantime so users can quickly find a workaround, and as soon as I have more news from our development team I will update this thread.

Same here, suddenly my fingerprint doesn't work anymore although it's been functioning for years.

Workaround still “works” for me. I keep Chrome and FF fairly updated and the workaround hasn’t stopped yet really. I right-click the grey LastPass extension icon and click the lone “LastPass” entry in the context menu. Anytime it prompts for authentication beyond my fingerprint (including password and 2FA) I close out of the browser completely and get back in and try it again and it always works the 2nd time (unless my 30 day 2fa session has actually expired).
0 Kudos
Reply
Resources