Re: My Last Pass Premium account just reverted to Free even though it doesn't expire until Oct 2021!

1) Navigate to this URL: https://support.logmeininc.com/lastpass/help/how-do-i-contact-customer-support-for-lastpass-lp010121

3) Fill in your Name and e-mail address 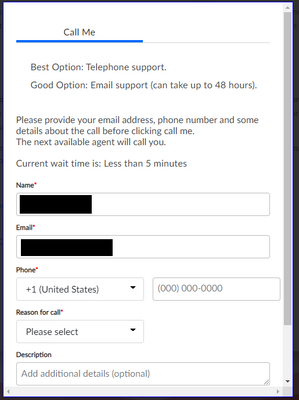 Re: My Last Pass Premium account just reverted to Free even though it doesn't expire until Oct 2021!

Thanks for the directions.
I tried getting a call back, but I don't get that option. I only have the email option.

I found the solution to the problem: Drop lastpass and use Bitwarden. Looks similar to me. And free.

I upgraded to premium from families through the iOS app and Last Pass does not recognize the upgrade. I’ve uninstalled/restarted phone/reinstalled the app a couple times with no resolution.
This is very frustrating as I use Last Pass both on my phone and desktop at work throughout the day.
Tags (3)
0 Kudos
Reply

Re: Premium Upgrade Not Recognized

I am having the same problem.  It continues to say "Free Account" under my name. And my phone won't populate my passwords.  I have the invoice of my purchase.

I'm having the same issue.

If this doesn't get resolved soon, there may be a class action. You can't take money from people, guarantee a product and not provide it.

I have a solution that finally worked.  Here's the process.

- Tell the person who answers to transfer your call to the Lasspass billing department.

- Do not accept any suggestion that they can only help by responding to emails.

- The call will be transferred, but often you will get a voicemail, where you can't leave a message, and it implies you have the wrong number or the department isn't a valid number.

- Hang up  and try again in a few minutes.

- After about 5 tries, the person transferring the call must have got tired of me because on the next attempt, the phone was answered by a live person, able to help with Lastpass issues, and they were able to fully and immediately resolve the issues.

It appears that Logmein has purchased the company we used to know as Lastpass.

And the reputation of Logmein remains as bad as it always was.

I have turned off automatic renewals.

Hello I opened a support ticket on Tuesday, and have received exactly 1 response and else have been ignored.

1) Went to use app on phone, was asked to pick a device

2) thinking my sub may have expired subbed via Apple

3) realized I was not expired, now double subbed

6) Support responds blaming me for subscribing via apple, that my sub worked fine before (it did not)

Now i am concerned when you cut email support for free accounts I won't get answers anymore even though I am a paid customer.