The LastPass extension is very unreliable in Firefox.  After logging into to LastPass, which I have to do everytime I (re)start the browser (the remember for 30 days options doesn't work), it may work for a little bit, but eventually, consistently, it will get to the point that when I click on the LastPass icon in Firefox, a small white bubble will appear but the menu will never load. Sometimes, but not also the time, disabling and re-enabling the extension will get it to work for a little while. But it has gotten to the point where it is more convenient to simply look up a password using the LastPass app on my phone.

I would rather not go back to Chrome (for privacy reasons) and am not a fan of Edge. I was hoping that Firefox was widely enough used that it would be properly supported. My instance of Firefox is up to date at version 93.0 (64-bit).  Privacy and Security is set to standard.

Below is a screenshot of what it looks like when I click on the LastPass extension icon most time.  It just stays stuck at that white bubble. 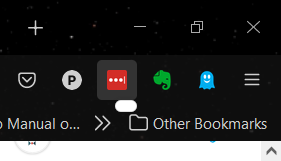 Are you experiencing this issue when using a Private window in Firefox? If so, this is an issue our team is aware of and working to resolve, another user has found a workaround in the meantime as well in thread thread: https://community.logmein.com/t5/LastPass-Support-Discussions/Last-Pass-not-working-in-private-windo...

Been this way for about a month now. The extension will not load, and is just as your screenshot shows. You cannot click on the extension link to open it and sign in as well. The only recourse is uninstalling the extension, reinstalling and then it works for that session. As soon as you reboot the computer, an iMac in my case, it reverts back to not working. It works in Chrome, but I am not willing to use chrome.

This is incredibly aggravating.

@Stopit Are you using it in a Private tab or regular Firefox tab? Have you tried clearing the LastPass cache instead of uninstalling? 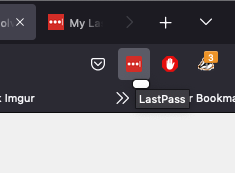 Hard to determine which settings may be affecting this, but it is not only happening on private tabs.  I would hate to turn off all of Firefox's privacy protections. Already, I have it on "Standard" settings which is lower protection than I prefer.

Usually, when it happens, I go to extension management and toggle the LastPass extension off and then toggle it back on. Then I go through login and multi-factor authentication again. And it will work again for awhile.

I'll try the workaround of opening it in a new frame, but I never get a blank box, just a white bubble.  But I'll try to see if that works.

Okay, so when I open in a private window and open LastPass, I get the issue with the white box which I can open the frame in a new tab.  But this is not the same issue that this thread discusses. The issue I'm describing is happening in a normal window with standard settings.  It is hard to reproduce.  But it happens frequently.  Since I use LastPass A LOT throughout the day, eventually when I click on the extension icon, instead of loading the menu, it loads a small white bubble.  I've not been able to see of the load frame in another tab workaround works since it is now working.  If the issue reappears, I'll try the workaround and report back if it works.

I am having the same exact problem on Firefox for over a month now and it is so frustrating.  I have to log in every time I close the browser and noticed that sometimes it logs out even if I haven't closed the browser.  I too get that white bubble instead of the LastPass dropdown menu when I click on the extension.   It did work properly until a recent update.  Windows 10, Firefox, and LastPass are all up-to-date on my computer.   I use Firefox all the time, and this is such an inconvenience.  I am NOT using a private tab.  I have tried every suggested method here and on various help sites to cure the problem.   I get temporary relief after changing the security settings, closing the browser, logging back in, but then it goes back to the same problem.  To avoid the constant problems and in order to use LastPass, I also have to keep Chrome open and whenever I need a password, I have to switch to Chrome, find the password, copy it, and paste it in Firefox.  I am paying for a service that I initially loved, but now it is just a nuisance.  It seems like the technical team as LastPass could figure this out.

Was your question answered? Please mark it as an Accepted Solution.
Was a post helpful or informative? Give it a Kudos!
0 Kudos
Reply
Resources