We have been having an intermittent issue with using one touch dialing for GoToMeeting in the iOS calendar. Of occasion, there are too many numbers parsed into the one touch dial in and the phone just dials through all of them, meaning it doesn't connect to the meeting. It doesn't seem to matter who schedules the meeting or who receives the invite, sometimes it happens sometimes it doesn't. Not sure if it's a GoToMeeting issue or an iOS issue, but it's been happening since January with increasing frequency.

As you can see in the image, there are a bunch of symbols, letters, and numbers following the pound sign. The phone just keeps dialing all of those, and results in an error that it cant find that meeting number. 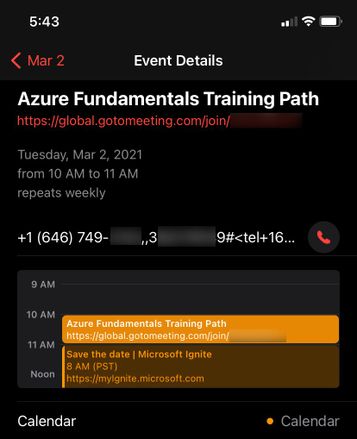 A bunch of junk gets added after the pound sign

Re: iOS Calendar One Touch Dial

@RalphWiggum  Do you know who is creating the invitations themselves, and the steps they take to push out the meeting details?

Re: iOS Calendar One Touch Dial

In all cases, the meeting invite is being created using the G2M Outlook Plugin and sent out through Outlook. There are several different people creating the meetings that this is happening to, but it doesn't happen to every single meeting they create.

I am not certain, but what I suspect may be happening is an issue in how the iOS calendar is parsing the information from the Outlook meeting invite. There are three lines included in the Outlook invite: Dial in phone number, One-touch, Access code. It appears to me just based on the formatting that the iOS calendar knows to use the dial in number and access code to create a one touch dial in number, then it doesn't know what to do with the One-touch line and just appends it to the end, starting with the <tel portion. Does that make sense? 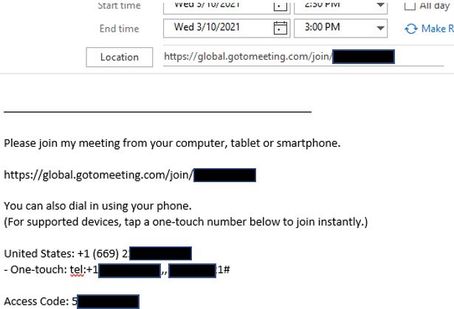