My name is Asif and I work in TSDSI. We have a GoToWebinar Standard  license. Participants from all the region around the world are attending TSDSI webinar. We observed that "Iran" is not included in the GoToWebinar registration form in the Country/Region field.  Also, some of the members of TSDSI complaining for the same.

My suggestion is to enable "IRAN" and other countries should be added which is not included yet in the Country/Region of the GoToWebinar Registration Form.

We have been notified by two customers this week that they were prohibited from registering from our upcoming webinar (they assumed) because their country--Iran--was not on the country list on the GoToWebinar registration form. 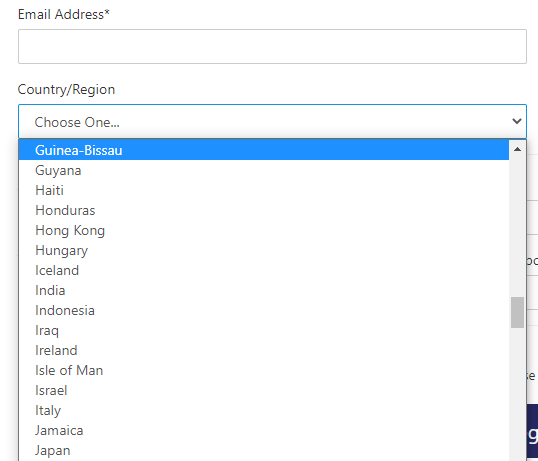 They thought this was a political decision on the part of our company. I had to write to let them know that it was an error on a third-party form. Syria is also missing from the list, and there are likely others.

Iran has 83 million people and Syria has 17 million. Meanwhile countries like Nauru and Palau (both with populations under 20,000) are on the list. So are countries that the U.S. has recently been at war with, such as Iraq and Afghanistan. So are places that are not even countries, like the French colonized islands off the coast of Africa, Mayotte (population 200,000).

Can Iran and Syria (and any other missing countries) be added to the list ASAP? In the meantime, I've asked our customers to choose any random country from the list, but this is not an ideal situation.

Re: Iran and Syria missing from list of countries on webinar registration form

@PageS   I'm afraid LogMeIn must still abide by certain United States restrictions in this regard, though you can always create a custom registration short-answer question for any locality that is not listed in the Country list.

Was your question answered? Please mark it as an Accepted Solution.
Was a post helpful or informative? Give it a Kudo!
0 Kudos
Reply
Resources