Ash, FYI this continued to be a problem.  Latest AMD Radeon software and latest 10.3 (2714) build of GoToMyPC.  The remote login no longer tells me screen blanking is not working but it's not as observed by standing next to my host while logging in via my iPad.  It's been months now any clue when they might fix this?  Others are posting it's a problem as well.

Has there been a resolution for this?  Screen not blanking out on hose computer

@EightDiving  It should have been resolved with a subsequent software update.  If you're experiencing this, please describe the host system OS in use, and GoToMyPC software build.

This has not been resolved for me at all.  I can sit on my iPad in front of my desk, log into my desktop computer via GoToMyPC and see everything on the screen on my computer.  When I first activate the app on my iPad it does lock the screen on my desktop (takes me to the screen lock image).  When I type the access code and get to the Windows login screen at that point everything on the iPad I can see on the computer screen.  Once I put in the Windows password and go into my computer desktop everything I do is visible.  I have checked and unchecked all the security functions but to no avail.

Host computer has Windows 10 Pro.  Graphics card is AMD Radeon RX570 with all fully up-to-date AMD software.  GoToMyPC software is version 11.1.2921 and when I use the software update module in the GoTo program interface it says I am up to date.

Please advise, given this lack of security I hesitate to use the software unless I know for sure no one is around my host to peek in on it.

@larryincmh  OK, can you tell me more about the Windows Host, how the monitors are attached, and if the system has been updated + rebooted lately?

One single monitor, 28" ViewSonic, connected to the video card via HDMI.

What I did not do was try the primary video and disable the secondary because I think the BIOS disables the onboard card when an add-in card is found and so I could not get any image out the HDMI of the onboard card.  I have no intent to run it that way ever however since I have this much better add-in card so would prefer to make it work with it.

Also, I do run the full suite of AMD Radeon Adrenalin software for the graphics control, not just the basic Windows or AMD drivers, if that makes any difference.

The host machine is rebooted at least every other day as I am ADHD and like to hear/watch the machine start up.  Ha Ha.  Only half joking with that, I used to like it more with old HDDs the SSDs are too quiet.  Anymore I primary do it just to flush everything out after running one of those cleaner programs.

I have done all Windows updates, all the video card drivers are updated as are most of my system files (I run the Dell driver update component as well as a Driver Updater program quite frequently).    I used to with GoTo get the dreaded error window that tells me that the screen was not blanked.  One of the prior updates made that go away but obviously did not fix the problem (I seem to recall that was months ago, since working at home with COVID I have not thought to test this recently until I got a notice someone else had posted in the thread).

Any further thoughts on this?  Thanks for the input.

@larryincmh  In that case, are you able to call Customer Support when connected or in front of the Host PC?  We'll just want to gather the Host log files, probably correlate those with the Windows logs, and test the last working version of GoToMyPC software.  You can also reference this thread if they have hardware questions etc.

I have Windows version 19041.630 and they said that version will absolutely not blank the screen, if it's that important to me I need to contact Microsoft and see if I can downgrade.  I told them not to worry about it for now.  They said they are working on a fix with Microsoft, ETA for said fix is unknown but it will be as soon as possible.  Just look for a software update at some future date.

So that's it, for now I will not rely on security if I use the product remotely.  This has been an ongoing problem for some time, it looks like the thread started about a year ago and I have never had a successful blank screen test since that time.

Have a nice day, thanks for trying on this one but seems the software engineers need to work it out somehow.

@larryincmh  Under the Host Preferences: Host tab:: unchecking Enable new screen blanking feature should disable this new method.  As long as you still have Blank out screen while connected checked under the Security tab then the previous blanking method would still work.

Nope, still no dice.  I had never had the enable new screen blanking feature enabled until yesterday actually when I was experimenting with this.  I just disabled that and stopped and restarted the GoToMyPC feature, logged in remotely and it's still not blanking.   See the photo.    PS:  Sorry if the photo is upside down it came from my iPhone and even though I edited it in Windows to re-size and it's right side up on my screen it seems it's upside down here. 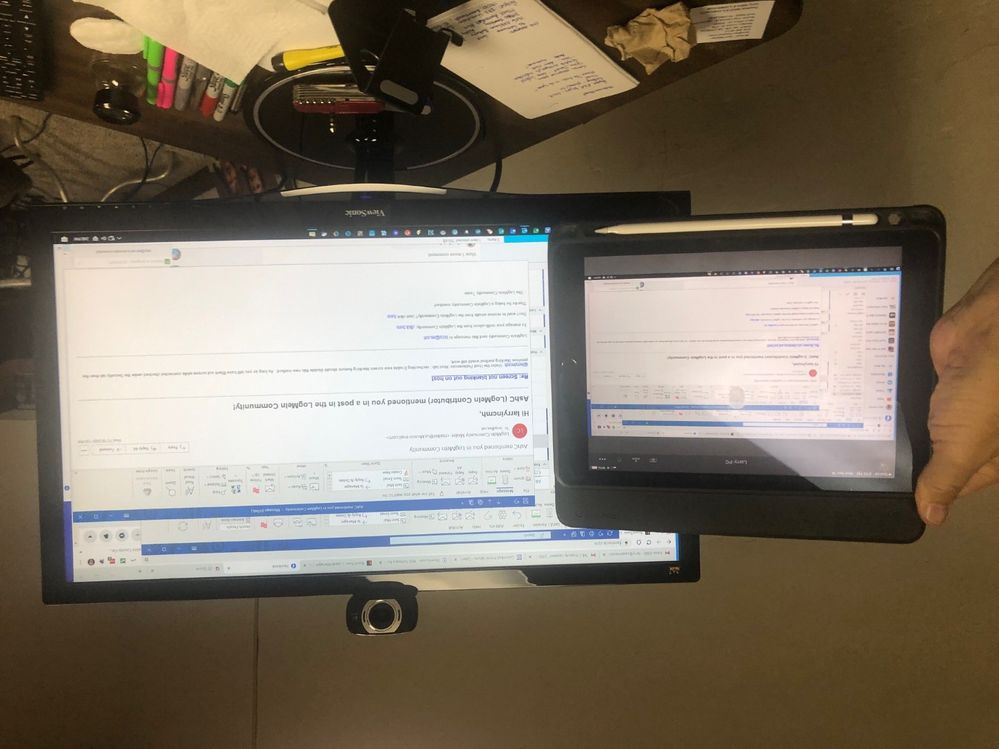